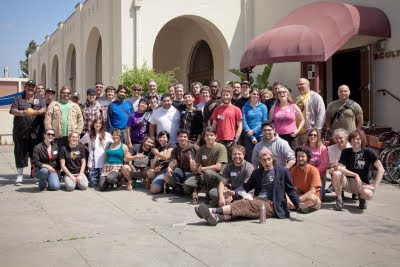 This past weekend, the Bicycle Kitchen was part of Regional Bike!Bike!, a gathering of Los Angeles Area bicycle repair co-ops, collectives, spaces, projects, etc. There were THIRTEEN represented and that's not everyone! On Saturday we all converged in the Faculty and Staff Center at LACC (thanks LACC) and got to know each other, basically spending the entire morning introducing our respective spaces and projects. We had a tasty lunch of burritos provided by the Burrito Project and Food Not Bombs (which Woody rode in on a ladder trailer,) while being serenaded by a couple of members of Bikesan@s.

In the afternoon, BikeRoWave and Bicycle Kitchen shared as much information as a group of 40+ can digest on how we are each structured/operated and then we started to get into info sharing on Volunteers (recruiting, training and retaining,) but by then it was time to go to the Afterparty at BikeRoWave. The next day a MUCH SMALLER GROUP ; ) rode from Valley Bikery all the way to Long Beach's HUB, a 55 mile expanse, visiting Bike Oven in between and devouring potato tacos at Atacor. It was a GREAT weekend!! Thanks to ALL who participated!