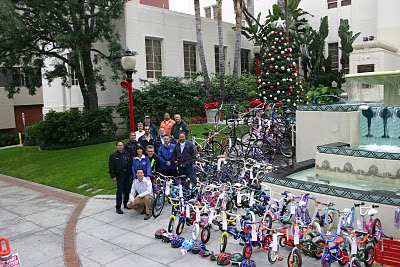 From Kreigh Hampel an OG Cook a.k.a. "Dr. Rot:" about Burbank's good bike deeds.
Heck! The story made it into the Chicago Tribune!
My Dear trouble-making cooks,

I want to tell you one story (of many) that all started at the Bike Kitchen a few years back. I also want to give you props and remind you why your work is so freak’n worthy. The attached picture shows bikes at Burbank City Hall. It all started 6 years ago when I first walked into the Kitchen at Eco Village and my jaw dropped. Not long after, I started lurking around the kitchen at hel-mel, then started helping out as a back door cook.

It was the Kitchen bubbles that caused me to wrastle a couple of cooks down to Burbank’s first bike tune up event at the YMCA, later there were tune up classes at the Recycle Center, then some bike tune up tents at neighborhood events and at the Chandler bike path. The bike thing was growing.

So last year we put together a holiday bike campaign with the Salvation Army. Again, it was pollinated with bikes donated from the Kitchen. We cleaned up about 10 bikes for kids. More mysteriously however, cooks and ridazz at large were suspected of silently spreading pixie pollen all over town. Turns out Burbank got inoculated with a crazy passion for embracing collective bike culture just before the holidays. The holiday bike campaign exploded with nearly 25 volunteers. Nearly 90 bikes were donated and about 60 were given to kids who need a little good stuff.

The bike thang took on a life of its own. City employees and local wrenchers partnered in a high level of good humor and energy. Is there conspiratorial bike pollen blowing around? Wasn’t it just a decade ago that LA's bicycle rebirth was germinating in the cracks of the cultural creatives, the voluntary poor, and the car-free believers? Now it's blowing into the suburban master plans, codes, and annual budgets of government!

Lucky for Burbank the goofball pleasure of wrenching together has coalesced a feisty and well oiled troop. It’s a straight up crew of odd bedfellows (police, fire, community development, city attorney, public works and transportation planners) and it’s gone so far as christening a spiritual leader whose only credentials include a Harley, a pressure washer and a big socket set. Go figure, we all have perma-grin this week over bikes.

As if the three stooges had come down from the shag carpet mountain top, we have a new, twisted, unconventional scripture for laying down peace between “THEM and US” and a chance to do a little good around this place. My hats off to all of the new bike comrades, rag-tag believers, rust belt eliminators, punsters, doers and big hearts. This has been the highlight of my year and it is all because of the Kitchen!!!! I repeat, this glob of bikes on the steps of city hall all started with the Kitchen! Your work is rippling bike love around the world!

TO ALLA YOU BIKE BUDDIES, HAPPY NEW YEAR FROM THE BICYCLE KITCHEN.

Your Friendly Neighborhood Cooks
Posted by Bicicocina at 3:26 PM No comments: 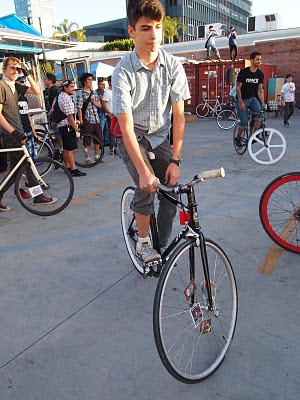 How'd you hear about the Kitchen: My aunt told me about scoops. I stumbled upon the Kitchen after getting (the best) ice cream (ever). The rest is history...

Where's your favorite place to ride your bicycle? I'm always happy when I'm on my bike, so wherever it takes me. I ride Mar Vista a good amount. Lotsa friends around those parts.

What do you do when you're not at Kitchen? Bike with friends, bike alone. Listen to music. Read. Climb whatever i can get my hands (and feet) on.

Posted by Bicicocina at 2:54 PM No comments:

Every year the Bicycle Kitchen is invited to lead off the Echo Park Community Parade, a neighborhood holiday parade on Sunset from Douglas to Park. The idea is to get a bunch of Cooks and FOK's (Friends of Kitchen) to ride their bikes and whoop it up at the head of the parade. Last year we got rained out and on, but we prevailed and our spirits lifted. You can read about it in last year's blog post.

This year was a beautiful, late fall Los Angeles blue sky kind of day. The kind of day when you realize why people want to come here from Minnesota and other icy places. Sunny and 70s where logic tells you (well, if you're from Alaska or those other places,) there should be snow.

Coral, JP, Kelly and Ryan were joined in the booming sounds of Fred Schneider's Christmas album and the awesome marching bands by Echo Park Film Center's Paolo (we couldn't believe he came back!) and Lisa--in a bear costume! and their friend Tommy from Toledo AND we all joined forces with the Echo Park Time Bankers on bicycles, tricycles, and roller skates clad in cardboard and wielding cardboard swords. Killing capitalism for free! We made quite the rag tag crew and the crowds loved us! Especially, Gigi who steamed full speed ahead on her trike and Abe Lincoln with her "Pose as a Time Bank Dollar Bill." We couldn't go slow enough (see photos--there's a lot of standing around.) But, we had fun, fuN, FUN! And this year we kept our trophy. Next year maybe we'll all make a cardboard float to pull along.

Posted by Bicicocina at 3:13 PM No comments:

Wow. We can't believe 2010 is coming to a close! The Bicycle Kitchen/La Bicicocina would like to take a moment to wish you the Happiest of Holidays and share some of our accomplishments for this past year.

• We celebrated Five Years of wrenching at Heliotrope and Melrose (Hel-Mel)!

• We formed the County Cycling Collaborative (CCC) with Bike Oven, BikeRoWave, Valley Bikery, C.I.C.L.E. and LACBC. We applied for and were awarded funding through the Los Angeles County Department of Public Health's RENEW Initiative. The CCC will be working together for the next two years under an obesity prevention initiative to do two programs: 1. Creation of a paid “Bike Wrangler” who will work with agencies and institutions to acquire abandoned bicycles and redistribute them to the co-ops and individuals through 2. Public workshops on safe riding and repair skills. One of the goals of the project is to establish other Bicycle Kitchen-type co-ops in new neighborhoods,

• We have taken final steps towards completing an additional bicycle repair education space in partnership with the CRA and Council District 13 at a development above the Metro at Hollywood and Western. Named The Bicycle Kitchen: Wrench&Ride, it will begin construction in early 2011 and will be open by September.

• Not to mention we continued to provide countless open hours at 706 Heliotrope Drive where our volunteer Cooks help folks learn how to repair and maintain bicycles themselves at a suggested donation, never turning anyone away for lack of funds.

If you're as excited and proud of these accomplishments as we are and are looking for a great place to make a year end Tax Donation, consider giving to The Bicycle Kitchen/La Bicicocina. We are a 501c3 nonprofit and can provide a TAX ID letter. You can donate HERE. We also gladly accept bicycles and bike parts donations.

Here's some final workshops, events and holiday closure dates as we wrap up 2010. And, hey, we have some slick new stickers perfect for your head or down tube. Come on in and pick one up in person--they're free!

Ride your bike and join the Bicycle Kitchen as we lead it off. It's become a tradition.
http://www.echoparkcommunityparade.com/

Dec 19th - INTRO TO WHEEL BUILDING. Everything you need to know BEFORE you lace your wheel.

Both workshops are from 9:30-11:30am at the Bicycle Kitchen and have 6 slots.
$30 suggested donation. No one turned away for lack of funds. RSVP HERE.

Ride On and Happy New Year!