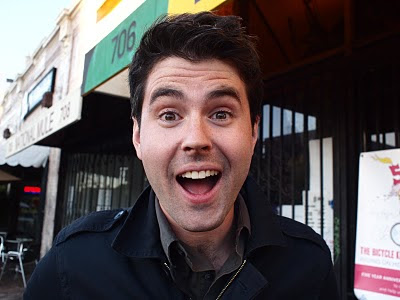 Cookin' since: Last year? | Holds down: The day of war and law.

How'd you hear about the Kitchen: Hipster foster brother.

Where's your favorite place to ride your bicycle: Spinning class.

What do you do when you're not at Kitchen: Making dioramas.

Why do YOU think people should donate to our five year fundraising campaign: How else will the children get their handlebars cropped? How!?

Posted by Bicicocina at 3:48 PM No comments:

Come ride, dance and experience the ultimate freedom: trading your car for a bike!

Ft. Collins, CO, April 15, 2010 – Clip a card in your spokes and fluff the rainbow wig …Tour de Fat is back for its 11th season! New Belgium Brewing’s traveling celebration of all things bicycle rolls through 13 cities this year, raising money and sharing bike love. At each Tour de Fat stop, one person will help honor mankind’s greatest invention, the bicycle, by handing over their car keys and committing to a year of car-free living.

For the fourth year in a row, Tour de Fat is looking for volunteers to accept the swapper challenge. One volunteer in each city will give up their car and receive a hand-built Black Sheep (http://www.blacksheepbikes.com/) commuter bike. The volunteer is chosen after submitting a video or essay describing their desire to live sans-car for a year. To submit an application, log on to http://www.newbelgium.com/tour-de-fat.

“The car-for-bike swap is the pinnacle of the day, illustrating one person’s true belief in all that a bicycle can offer,” said Bryan Simpson, spokesman for New Belgium. “Bikes represent freedom, fun, fitness and folly while helping the environment. It’s a way of life that we live and share at New Belgium.”

Tour de Fat kicks off in Chicago on June 26 and wraps up in Austin on October 30, with first-year debuts in two cities, Milwaukee and Los Angeles. The tour originated in Ft. Collins, Colorado to increase awareness and participation in cycling as a sustainable form of transportation. Since then, it has become a rite of passage celebrated by bike enthusiasts of all skill levels across the land.

Why Tour de Fat is a Must-Attend Event:

See http://www.newbelgium.com/tour-de-fat for the Tour de Fat credo, schedules, videos and to submit your entry to swap your gas guzzler for a shiny new bicycle. Also visit our Facebook page: http://www.facebook.com/pages/New-Belgium-Tour-de-Fat/10150099069050417?ref=ts.

Tour de Fat 2010 will cycle through each of the following cities: 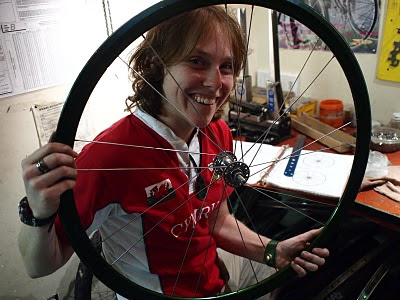 Rides: i'm now on the city streets with a fixed gear Sanwa 400 (old steel frame Japanese road bike) that i built at the kitchen (with loving help of various cooks...shout out to Coral!)! I also have a Trek Madone for the racin', roady times.

Cookin' since: A month or two? when was i officially Cooked? i can't remember!

Holds down: Bitchen shift (and other random times when i'm feelin especially bikey)
How'd you hear about the Kitchen: A couple of friends mentioned it on different occasions and i didn't need convincing to check it out! strategically placed vegan restaurant and ice cream parlor confirmed my destiny to volunteer on this block.

Where's your favorite place to ride your bicycle: Uhh...everywhere. I have come to absolutely love riding in the city. You begin to discover new routes, new sights, the city unfolds in a brand new light...the way los feliz slopes into silverlake that connects to echo park and leads into downtown...it's a new adventure each time out. It really doesn't matter where i'm going or what for...just the ride and the experience of living in the moment...there's no other feeling like it. and on a sunny day...PCH is a wonder.

What do you do when you're not at Kitchen: Well, when i was employed i worked as a producers' assistant at Titmouse animation studio and part-time at Babycakes, a vegan bakery. Unemployment brought more ride time, ice hockey, obsessive music listening and juggling! Step 3: now i'm leaving town for an extended backpacking jaunt and will travel nomadically around africa and to teach english in south korea...and hopefully ride some bikes there too. So currently...while not at the kitchen, i'll be traveling, photoing and blogging (and thinking a lot about how i miss the Kitchen).

**NEW QUESTION**
Why donate: Bicycle Kitchen thrives not only on the volunteered time that the Cooks provide, but also on the the people of Los Angeles who support us in turn. It is a wonderful place. Donate for that kid who comes in looking to learn how to build a bike and come away not only with a practical new toy, but also with new knowledge. Donate for the guy or gal who comes in, unable to afford a service to their bike and would otherwise be left without transport. Donate to inspire more bike riders in los angeles, to support alternative transport and...hey, because Bicycle Kitchen is a uniquely awesome place that keeps the community rolling safely on two wheels!
Posted by Bicicocina at 12:12 PM No comments:

Our Fundraising Gruppo's having another meeting tonight to begin the full throttle planning for our ending celebration. Mark your calendars! Saturday, June 12th. Everything else TBD. We're cooking up some schemes, that much is for certain.

In the meantime, we're super stoked to tell you that WE MET OUR 8K CHALLENGE GRANT, so generously offered by United Talent Agency's employee giving program!!! Thanks so much to everyone who helped us meet that goal.

Anyone out there want to challenge us with another one?

Your Friendly Neighborhood Cooks
Posted by Bicicocina at 5:26 PM No comments:

Freelance writer Lauren M. Whaley recently moved from the mountains of Jackson Hole to the city of highways in Los Angeles and contacted us for a radio story she was producing for her Master's Degree thesis at University of Southern California.

This is the result: ENJOY!

Thank you, Lauren and Congratulations!!!!

BK
Posted by Bicicocina at 4:52 PM No comments:

TOLA's Throwing a Race for our Fundraising Campaign! 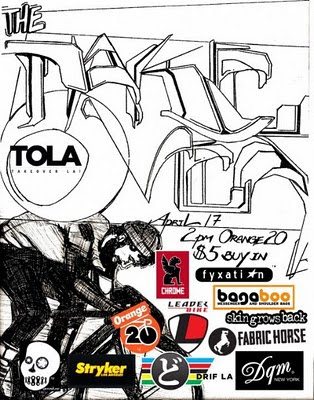 Takeover LA, blogspot and bike events producers are throwing a race and donating the $5 entry fee to the Bicycle Kitchen!

It's on Saturday, April 17th. Meets and Begins at Orange20. Register at 2pm and then the race starts at exactly 2:30pm.

There are eastside and westside checkpoints. You determine what checkpoint you go to by rolling a six side die. It's really the luck of the racers roll; you could be winning and right by the finish line, but you roll the die and come up with a checkpoint that's far away, and you lose the day. While on the other hand, a racer could be having a poor start or mechanical difficulties, then bewm, they roll for all the checkpoints close to each other and win the day!! It's anybody's game.

Sounds like a good ole time and a good ole cause. C'mon out and take a ride with Lady Luck, courtesy of TOLA.

Fundraising Campaign GETS a BIG BOOST!

We have been offered a CHALLENGE GRANT!

The Employee Giving Program of United Talent Agency has offered the Bicycle Kitchen an $8,000 Challenge Grant. For every dollar raised up to 8K they will match it! So far we've raised about $4ooo. HELP US GET TO THAT 8K and get closer to our 55,555.55 goal! Donate today!

Have a great weekend.

p.s. Looking for something to do tonight? Go HERE
Posted by Bicicocina at 11:38 AM 1 comment: 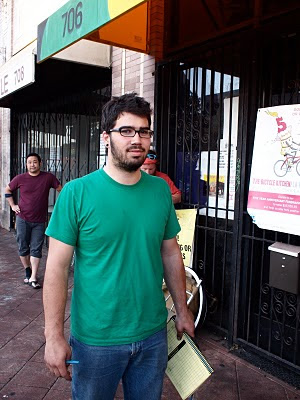 How'd you hear about the Kitchen: I came to the Kitchen at a time when I was super broke and super bored and had no money for my car and I think I heard about it at Safety Cycle.

Where's your favorite place to ride your bicycle: On the bike path to Santa Monica Pier and Redondo Beach Pier and back.

What do you do when you're not at Kitchen: I am a photo assistant and a colorist.
Posted by Bicicocina at 12:57 PM 1 comment: 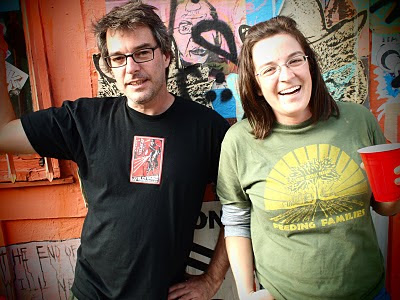 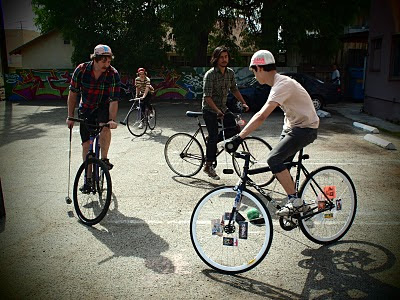 some of the fellas playing parking lot bike polo

The Pantry Parking Lot BBQ was a hoot! We lost power! There was an earthquake!! The tofu sticks burned! But, no worries: car stereo gave us some tunes until the power came back. the earth rolled on. the tofu marinade was delectable! there were two dollar burgers, some delicious home brew by eastside brewers and pure luck's bling. we played bike polo. we raffled off an AVOCADO from bledsoe's flophouse, as well as a truvativ crankset, some workshops, a bike belt, a handmade leather business card holder from oscar sanchez and a kitchen relic--a fool bag handmade by feddy feds back in the day. the boys of TOLA held down the corner by the vintage truck and with all the love and support an easter sunday could muster we raised $700!!!

it was so much fun we're going to do it again so. afterall, we have giant ketchups and mustards to go through. it was a GOOD day!!!
Posted by Bicicocina at 6:08 PM No comments: